If you ask me, I’ll tell you that 7 days in Iceland are not enough.

I would add at least 3 days or one more week, as exploring the country touring the Ring Road is simple and offers endless possibilities.

However, a week may be enough for a 1st time in Iceland if you don’t mind to coming back for more. Because you will want to come back!

When to go to Iceland: summer or winter?

Believe me, it doesn’t matter when you go… you will want to go back: Iceland is a country of two seasons.

In winter, Iceland gives you northern lights, wonderful snowy sceneryies and many other advantages. In summer, the colors change dramatically and the hours of light are endless, so you can visit more in less time in the country.

My 1st trip to Iceland took place at the end of February – early March and we were absolutely lucky with the weather! There was a massive snowstorm that delayed our flight but after that, we enjoyed some epic sunny days from sunrise (around 9 a.m.) to sunset (around 6 p.m.)

Our winter itinerary in Iceland covered the south of the country, from Húsafell to Jökullsárlón including Reykjanes peninsula.

1 week in winter is not time enough to tour the entire Ring Road so we had to select carefully what to visit.

Due to the snowfall of the century (seriously, it hadn’t snowed that much in Iceland since the 50’s) our flight was delayed almost 24 hours, making our week in Iceland even shorter.

During our week in Iceland we rented a 4WD that took us safely everywhere, even in the blizzard.

We arrived to Keflavik, the international Airport of Iceland, only 20 hours later than expected. There we were picked up the car rental staff and after checking our booking I drove through the blizzard to Hotel Húsafell.

Our plans for this day were totally opposite. We had a reservation for the previous night in a hotel near the airport and our initial idea for this day was to explore Reykjavik and the surroundings of Húsafell, ending the day at the hotel’s thermal pools.

After sleeping a few hours and having breakfast at Hotel Húsafell we found out that all the roads leading to Reykjavik and the Golden Circle were closed. We waited patiently and we started exploring.

Our first stop were Hraunfossar and Barnafoss waterfalls, as well as the Deildartunguhver spring, where we met the most beautiful dog in Iceland. On our way to Reykjavik we also had our first encounter with the beautiful Icelandic horses.

The road is beautiful and the scenery is amazing. The amount of snow is incredible and we must go very slowly. We stop to refuel in Reykjavik and continue to our next destination: Hvolsvöllur, where we were staying at a farm. Many of the roads were cut so at the end we spent most of our first day in Iceland driving.

Once again, the plans for this day were not these. Our intention was to visit the Golden Circle this day but it was not possible as the access roads to it were closed.

We woke up at sunrise to explore Thórsmork and Eyjafjallajökull on a day tour, one of the best decisions of the whole trip.

With them we visited Thórsmörk, one of the hardest places to reach especially in winter. With them we waded rivers, found Arctic foxes, explored glaciers and volcanoes and ate cookies – all in one only dat! It was one of the most amazing days of the trip.

We ended the day at the Seljalandfoss Waterfall and headed to our hostel in Vík í Myrdal. That same night we met the Northern Lights for my very first time.

We left Vík í Myrdal to continue driving to the West. The landscape changed dramatically as we got closer to Vatnajökull Glacier. There we visited Svínafellsjökull Glacier first, then we drove to Jökulsárlón and Diamond Beach. We spent hours there but it went by so fast! It’s one of the most incredible places I have ever visited.

Our last stop of the day was Svartifoss, the basalt waterfall. We made it there for sunset and after falling on the ice a couple of times (or three), we headed to our next accommodation in Kirkjubaerjarklaustur, where we could see the northern lights in a much clearer way. 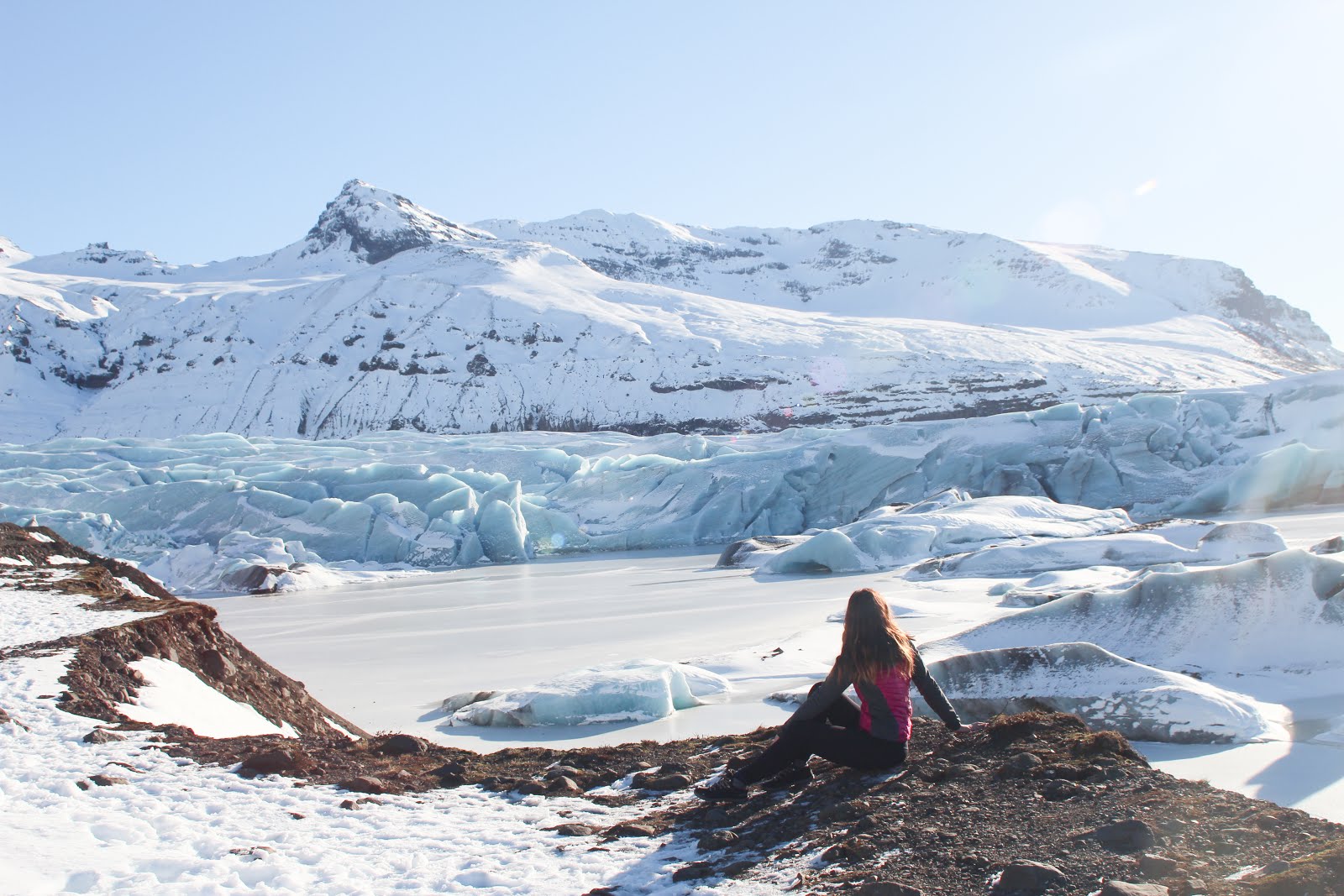 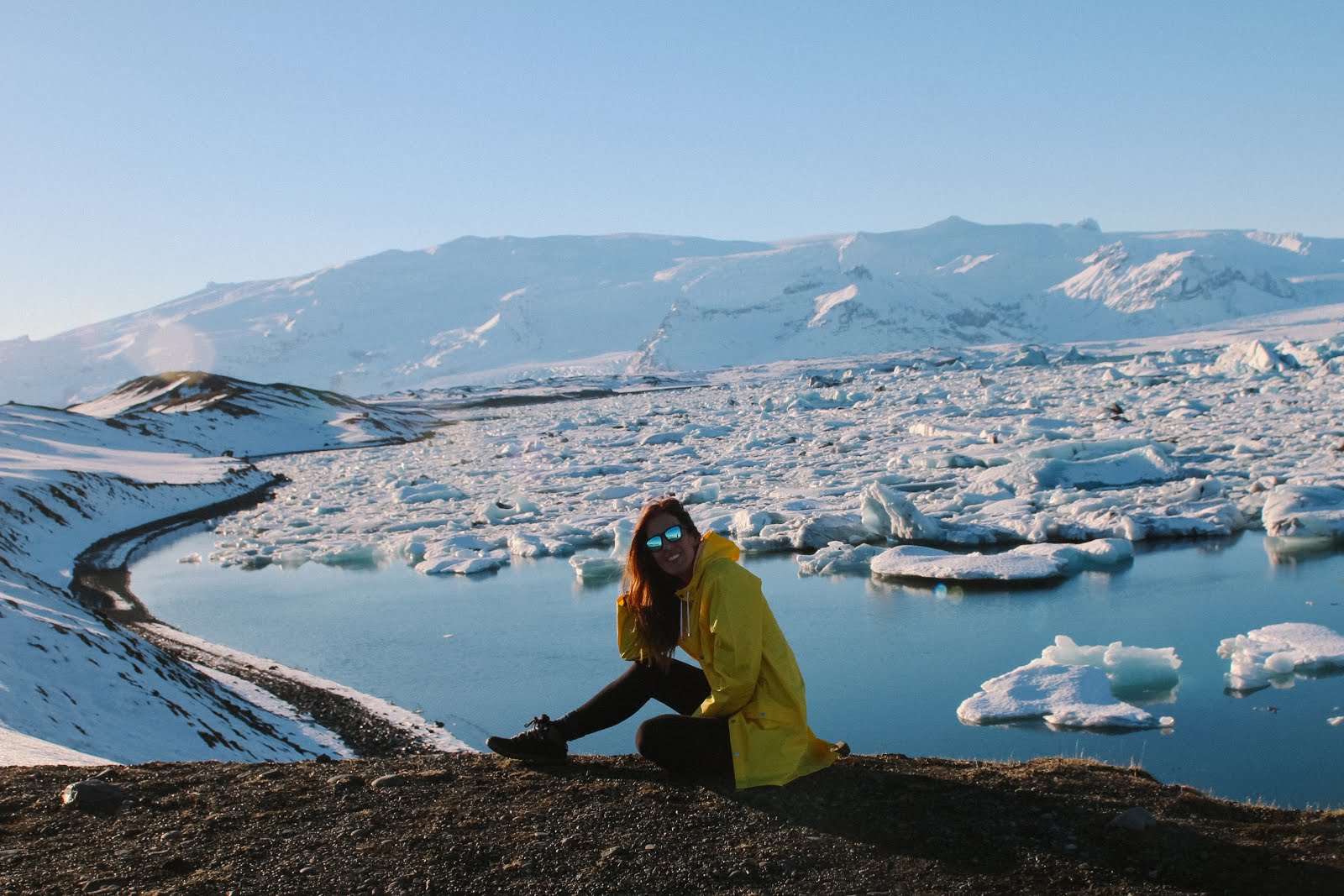 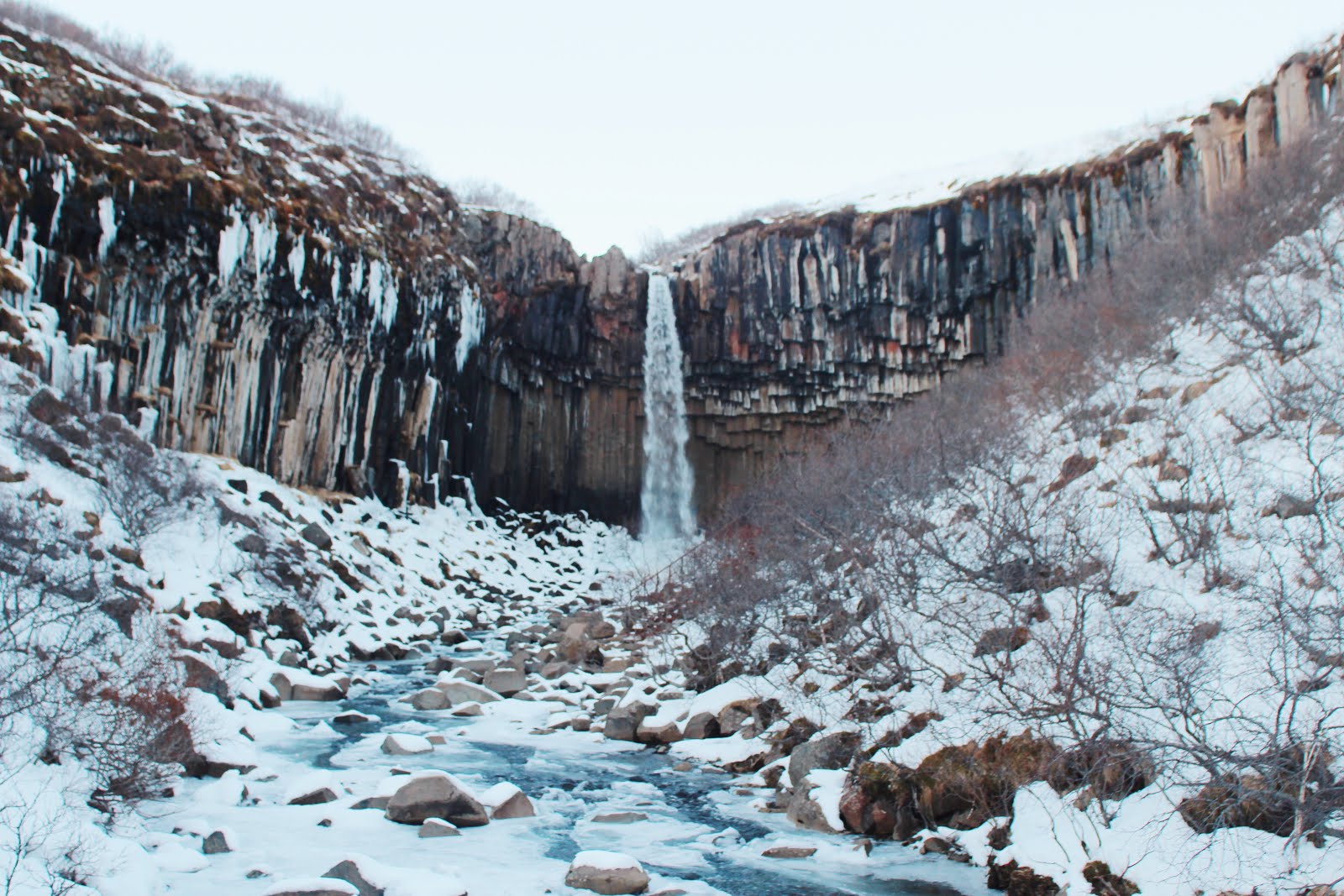 Kirkjubaerjarklaustur is really close to Eldhraun, the lava desert of the Laki volcano. We saw it completely covered by snow. We continue driving towards Vík í Myrdal and our next stop wass the famous Black Sand Beach and its basalt columns, the trolls on one side and Dyrhólaey the other. I have no words to describe the beauty of this place. As always in Iceland, everything you see is hard to believe. It looks like another planet.

We drove along the most amazing road that took us to Dyrhólaey. The climb is made by dirt tracks that can hardly pass two cars at the same time but the views on the top really deserve it.

After that, we visited Sólheimasandur, the wreck plane on the beach – an overcrowded experience compared to the places we visited until that time. I guess Instagram has something to do with it.

And we had a perfect end of the day. We visited Skógafoss waterfall, a bit too late to see it with the typical rainbow that usually appears in front of it but we were able to enjoy it without the crowds. When visiting Skógafoss don’t forget to go up the steps to get the most epic views! I’m not afraid of heights but there I could feel it!

Finally, we stayed at Thykkvibaer where we enjoyed the most amazing northern lights of the trip, and also from the warmth of the home! We stayed in Fjarkastokkur, a beautiful house from where you can see the auroras perfectly right from the window.

After a few days on the road, we decided to take this day easy. I drove to the Reykjanes Peninsula (whose roads were really icy!) and we visited Lake Kleifarvatn and Krísuvík before spending about 3 hours soaking in the Blue Lagoon.

After our relaxing bath we finally made it to Reykjavik, where after leaving our stuff at the guesthouse we decided to go out and try the city’s most famous hot dogs at Baejarins Beztu Pylsur and visited the Harpa building for another photo shoot.

We get up with time to visit Hallgrímskirkja, the Cathedral of Reykjavik and Solfar, the sculpture that represents an ode to the Sun, before heading for the Golden circle.

The Golden circle includes Thingvellir, Geysir and Gullfoss waterfall and was the most crowded part of the entire trip.

On the way down the car a few times to pet horses during which would be our last hours in the country. And after a short stop in Reykjavik to refuel we headed to the airport to catch our night flight back to Spain.

While in Iceland you spend a lot of time on the road, but the road is truly enjoyed and it’s a beautiful part of the trip.

If you’ve liked this post, pin it for later!